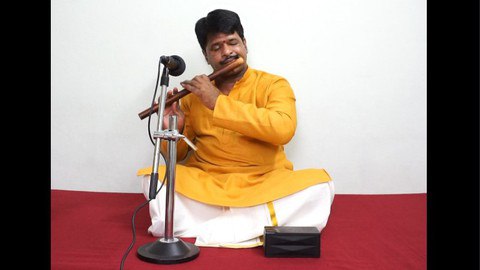 Kancharla Gopanna popularly known as Bhakta Ramadasu or Bhadrachala Ramadasu was a 17th-century devotee of the Hindu god Rama, a saint-poet and a composer of Carnatic music. He is a famous Vaggeyakara (classical composer)[a] from the Telugu classical era. He was born in the village of Nelakondapalli in Khammam district, and orphaned as a teenager. He spent his later years in Bhadrachalam and 12 years in solitary confinement at the Golconda prison during the Qutb Shahi-rule. Different mythical stories about his life circulate in the Telugu tradition. He is renowned for constructing the famous Sita Ramachandraswamy Temple and pilgrimage center on the banks of river Godavari at Bhadrachalam. His devotional kirtana lyrics to Rama illustrate the classical Pallavi, Anupallavi and Caranam genre composed mostly in Telugu, some in Sanskrit and with occasional use of Tamil language. These are famous in South Indian classical music as Ramadaasu Keertanalu. He influenced later composers such as the doyen of South Indian classical music and bhakti movement saint Tyagaraja. His songs continue to be sung at the Sita Ramachandraswamy Temple in Bhadrachalam.

Kancherla Gopanna (Goparaju), later known as Bhakta Ramadasu, was born in a moderately well to do Telugu speaking Niyogi Brahmin family to Linganna Mantri and Kamamba in Nelakondapalli village in the Khammam District of Telangana. He was orphaned in the teens, triggering an impoverished life, sustained by singing bhakti songs to Rama and collecting rice door to door. His life story has been largely reconstructed from poems he composed or is assumed to have composed, where there is a mention of events of his life. For example, one bhakti song mentions Narayanadasulu, a term linked to the Narayana mantra, is believed to be linked to Sri Vaishnavism guru Raghunatha Bhattacharya, who initiated him as a boy into the Dasarathi tradition. These and other hagiographic accounts found in Yakshagana or Harikatha compilations present him as a boy-prodigy with an impulsively creative mind composing lyrics on the Hindu god Rama.

His maternal uncles were the Madanna and Akkanna brothers. They had helped Abul Hasan Qutb Shah (Tana Shah) gain power after the death of Abdullah Qutb Shah in 1672, Tana Shah’s father-in-law. As reward for their material support during a period of power struggle with Aurangzeb and the Mughal Empire, the brothers were appointed ministers at the court of Tana Shah of the Qutb Shahi dynasty in Kingdom of Golconda. They helped their orphaned nephew Gopanna. Beyond this, little is known about his early life and much is shrouded in mythistory created by the later hagiographic tradition. He is said to have learned Telugu, Sanskrit, Kannada, Persian, and Urdu.

In 1650, Gopanna traveled to Hyderabad to meet his maternal uncles, who were at that time working in the tax department of Golconda Sultanate under the minister Mirza Mohammed Sayyad. They persuaded the minister to give a job to their nephew Gopanna. Mirza Mohammed Sayyad appointed Gopanna in tax collection department in Bhadrachalam, where the temple dedicated to Rama already existed.

A different version of his career is found in Ramadasu Charitra, a hagiographic Telugu text. It states that sometime after 1672, Ramadasu in his early 50s, was appointed as the tahsildar (tax collector) of ‘Palvoncha Paragana’ by Akkanna, his uncle, who was then a minister and the administrative head in the court of Qutub Shahi Sultan Abul Hassan Tana Shah.

How To Make Better, Faster Decisions At Work

SEO Tricks and Hacks: Making Search Engines Work for You.